I've just bought another pack, I had no idea just how useful these things are around the home. Whether it was to make door handles more comfortable to use, a plinth for an ornament or to fix items that would have been otherwise thrown away because an important piece of plastic was missing, this stuff is ready to go.

I use these when i get holes on the soles of my vans skateboarding shoes to due friction with grip tape. They get the job done and saves me a lot of money compared to buying brand new shoes. Theyre not perfect of course because they can get a little slippery before breaking them in which makes sense they arent designed for this niche use. Still a lot better than nothing tho. The black and white colours are especially nice because they blend in well with the soles.

I've been using these sticks many times without any problems but i've found that you do have to leave them in very hot water for at least 2 minutes before shaping them. Customer service is 1st. class as well.

The cable holder broke on the vacuum. The handle split on the watering can. Just have to live with it till I remembered I'd bought fix its. A mug of hot water and it's sorted. Unfortunately I've inherited the leftovers that I bought for dad, he loved how useful and simple they were.
I even made holders so I could wear two pairs of specs instead of those awful bi-focals.
Limited only by your imagination

Lovely and clean and easy to use. Great to know it can be re-used over and over. No nasty smell like some mouldable stuff

I couldn't wait to get my hands on FixIts. I had planned 3 projects - all three worked out great and look like standing the test of time!
Previous (similar) products that I have tried start to 'go-off' as soon as the packet is opened, this is not the case - much more flexible and much less wasteful!

Different to Sugru. An advantage is easy to change shape by reheating. A disadvantage is it is more solid unlike the rubbery feel to Sugru

Not QUITE AS SIMPLE AS IT LOOKS but once I go the hang of it, I fixed my charger cable. Not beautiful but ok

Bought these to fix my charger cables as it advertised. So far it does what it says so I am well pleased!

Works as described in the adverts. Easy to soften, mould and apply. Very useful.

I have used it to fix shredding charger cables and to wrap my bassoon reed .
Has worked very well in both cases. Not able to get it looking pretty but it sticks very well and does the job.

Gave them as a present so don’t know how they worked out!

Had a hole in my plastic rattan chair fixed.

I like the novelty of this but it's harder than it looks to mould the plastic into a small object. That probably has more to do with my less than artistic fingers, but I'm sure I'll get the hang of it.

So easy to use and worked great for patching a cracked plastic casing. Had bought some for me and ended up giving them all away as gifts then forgot to get myself some more. Now remedied!

Saw this product on "customer is always right" some time back and as per usual forgot about them! When I needed to fix the bottom of my fridge door I looked up how to fix plastic, and the Fixits popped up! They are brilliant and so easy to use. Best £10 I have spent in a long time and quick free delivery.

I used a small heat gun to heat the plastic and it worked great.

I am going to find this very useful

M
FixIts | Jute storage pouch MarkYork
Does what it says

Fantastic product. Need to work fast with it though. Suggest you keep it in hot water longer to get advantage of the longer working time. Once hard it is just what it says it is.

Not used yet . But disappointed sure I order all black pk ,but received multi colour ,

Hi Maureen, Thank you for the message, I've taken a look at your order and it says you ordered one pack of black, white and orange sticks. If this is not what you received please could you email info@fixits.com

I found Fix-its tricky to use. It sets quickly so you need to work fast which isn't easy when trying to repair something.
Using a heat gun to smooth the surface is also tricky. There is a very fine tipping point which is difficult to gauge where the surface can be smoothed or is too sticky and just makes a really rough surface.
I found that heating the metal spoon, instead of the set fix-its material, marginally more effective at smoothing the surface but that just took too long so gave up.
I did manage to effectively used Fix-Its to repair the handle of a tubbie which I use in the garden all the time (see picture) It took one stick of Fix-its and has held up well so far,
It was however not effective in repairing a leaking fuel tank on the auger as its a hard set, nor was it very good at providing a flexible cable fix.
I appreciate that the instructions say the thinner you make it the more flexible it is but the thinner it is the faster it sets which makes it impossible to get thin enough to be as flexible as Sugru for cables.
Definitely a useful addition to the toolbox but not as versatile for me as Sugru. Sorry. 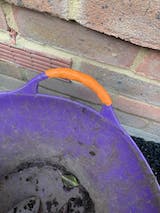 I used FixIts to repair my whiteboard corners. I travel and train first aiders so the whiteboard is essential kit that gets bumped around and broken. Now fixed as good as new. Also with the same pack of 3 sticks I repaired the fixtures on the parcel shelf in my car. I still have one stick left! All in all the £9 pack of FixIts saved me over £150 and saved two large usable items going into land fill. I will definitely use FixIts again when the need arises. 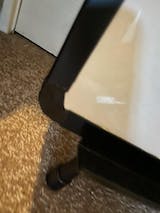 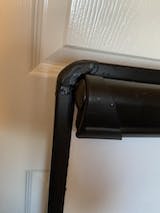 Fixed a broken hinge that had been bothering me for ages. Really love that I can soften the whole thing again with a hairdryer if I make a mistake and want to start again, or just soften it locally to reshape, add material or pinch a bit off. It's so versatile and does the job brilliantly where nothing else would have worked so I'm very pleased! 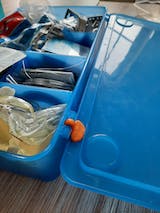 I bought these for my husband as a stocking filler. He used them for the first this week to fix the lead to our daughter's lamp. The wire had pulled away from the base slightly and it had stopped working. This worked very well and was quick and easy to fix.